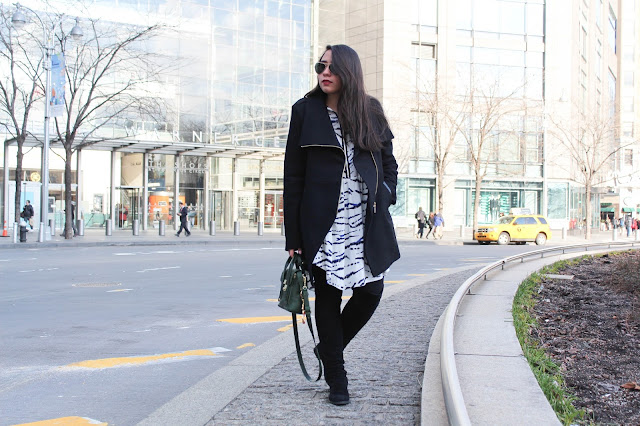 Happy Monday!
It feels good to blog again and get back into the swing of things. 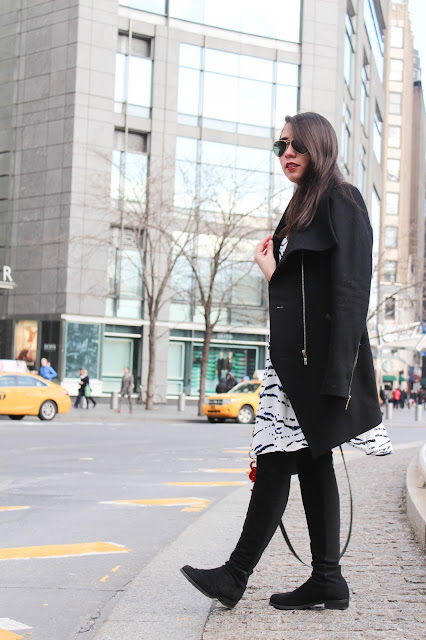 Ok, so what had happened was… I took an involuntarily week off from blogging. Do you ever have those weekends where you lay around like a blob and do absolutely nothing? Like to the point of not moving or thinking about anything? Well, that’s me every weekend, there are just different levels of laziness and last weekend we were on “extreme” on the lazy meter.
It’s funny because I had a pretty successful week at work and a well rested week in general, which is ironic because we are in the midst of fashion month and my boss leaves for Paris this week. I’ve mentioned on numerous (and I do mean numerous) occasions that my work hours are ridiculous. Like, I commute home when the people who work the graveyard shift are commuting to work. But, the other week I was having drinks with some friends & PR people and one of them said something that really resonated with me. “You have to give yourself a deadline. There’s always something more you can do, but you just have to say no, I’m going home.” The thing is, I’m the first one in the office & I’m the last one out. No, this isn’t me being pretentious like “oh look at me, I’m the hardest working one here.” Nope, not saying that at all. But, I realized that I have a problem of not feeling like I’m good enough or like my work isn’t good enough. In a sense I lack confidence. I could be working from 8am to 10pm and still feel as if there is more I need to do or I didn’t do enough or there’s something I should stay and do. So throughout the week, I really made an effort to be out the door by 7-7:30 and it felt great. To be out the door by 7, home by 8 and in bed by 10 felt incredibly refreshing and I was ready for the next day and oddly enough my to-do list and organization was even better with the new hours that I decided on. 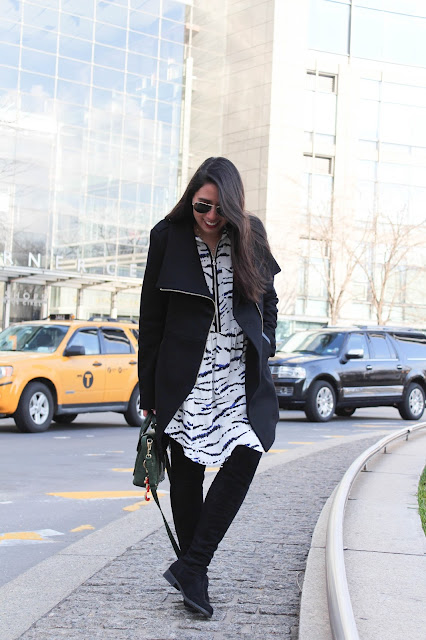 It’s no secret that I’ve had a rough transition into this position and a rough last year in general, and frankly I’m still not comfortable opening up about all those details and emotions on my blog, but if there is anything this last week has taught me, it’s that you need to do things for yourself. In a sense, you need to be selfish and put yourself first. A lot of times, I fight to keep my eyes open to blog even when all I want to do is go to sleep because I hear all these bloggers talk about how they work so hard, and give up sleep for their blogs and are so dedicated and you have to do this and that and blah blah blah. So I hate when I miss a post because I feel as if I’m not on the same level as other people, but frankly, me missing a week or a day doesn’t mean I’m not as dedicated or as hard working. And if something thinks that then so be it because I don’t think that about myself. If I choose to go to bed because it’s going to be better for my work day tomorrow then so be it. I’m also sure that there’s probably something I could be working on at work or there’s someone there judging me for being an assistant and having the audacity to leave before 8, but frankly I work better when I’m well rested so be it.
So, my point is, put yourself first, do what’s best for you and don’t give a damn what other people say or think. If you recall my New Year’s goals, one of them was to “be happy” and this last week was really eye opening for me. 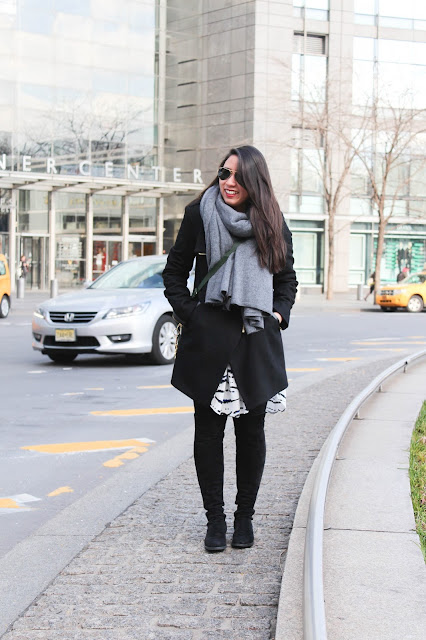 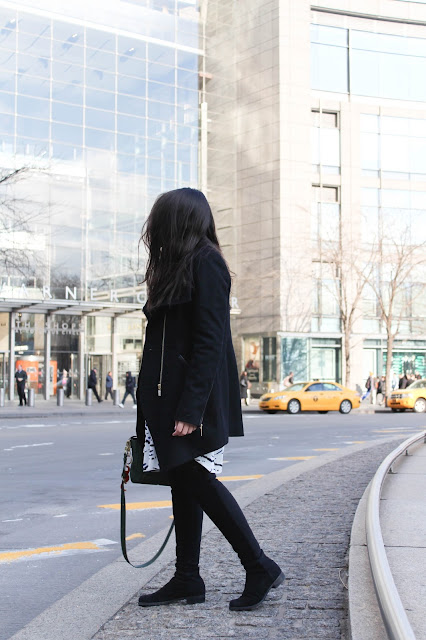 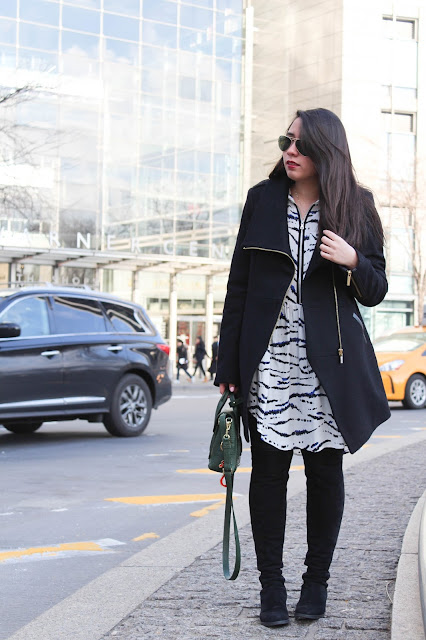 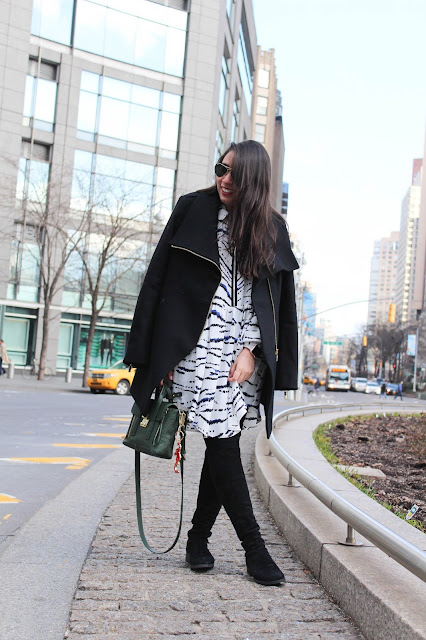 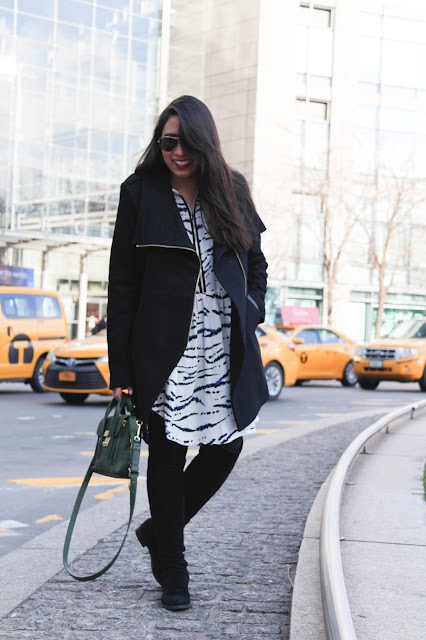 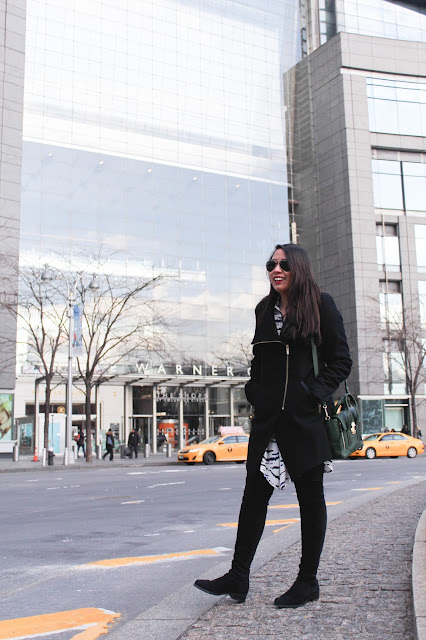 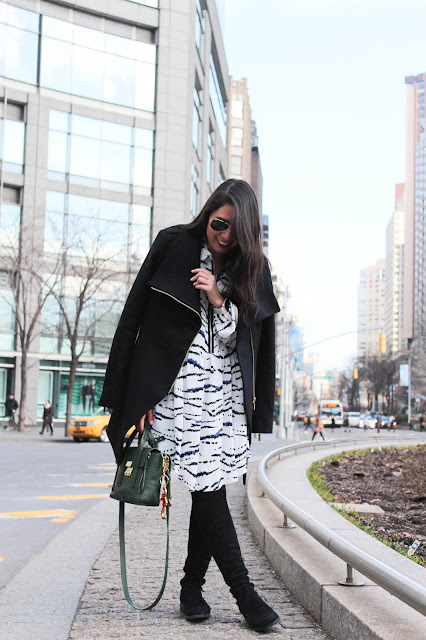 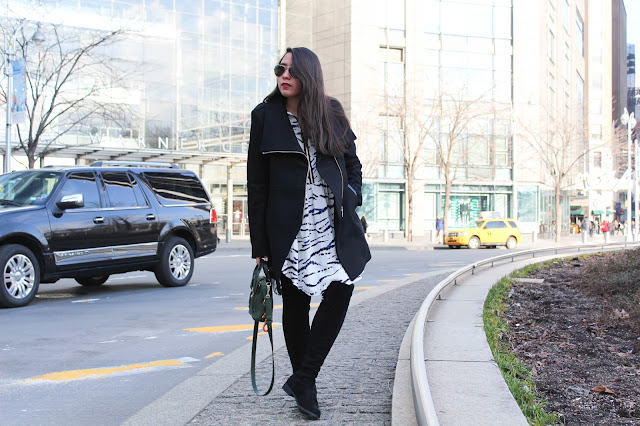 For those of you who are not interested in emotional posts, let’s talk fashion… I wandered into French Connection the week before Fashion Week looking for new pieces to add to my wardrobe and spotted this asymmetrical coat. I loved the interesting cut and thought it would be the perfect piece to wear because it speaks for itself. I’ve also been having a moment with shirt dresses and loved this long sleeve printed one so I picked up both and loved the way they looked together and on their own.
I made several Fashion Week purchases, which you’ll be seeing on the blog throughout the next few weeks, but all of those purchases were pretty pointless since I went to one thing. Normally, this time of the year I would be doing a NYFW recap, but this season I skipped out on everything. Here’s why: I was heading to two previews with a friend on Thursday night and actually pretty excited to kick off fashion week. Well mother nature and my luck had other ideas because it was cold as hell, on top of that I mapped out and went to the wrong location, had to rush to the right location, could not catch a cab to save my life, no like seriously even the empty ones passed me, my phone (which was at 80%) died on me because it was that cold, my hair and makeup looked like a mess and I couldn’t fix it even if I wanted to because I couldn’t feel my hands. So after that amazing experience, I said to myself “you know what self, there’s always next season.” So I skipped every last thing on my schedule because it was too damn cold and even I’m not crazy enough to brave -20 degrees just for a picture, but major props to those of you who did. You’re the real MVP in this story.
Outfit Details
Dress: French Connection (& here). Coat: French Connection. Boots: Stuart Weitzman. Bag: 3.1 Phillip Lim. Keychain: Marc Jacobs. Sunnies: Ray-Ban.

This site uses Akismet to reduce spam. Learn how your comment data is processed.